Stay up to date with the latest news and special offers by signing up for our newsletter today! 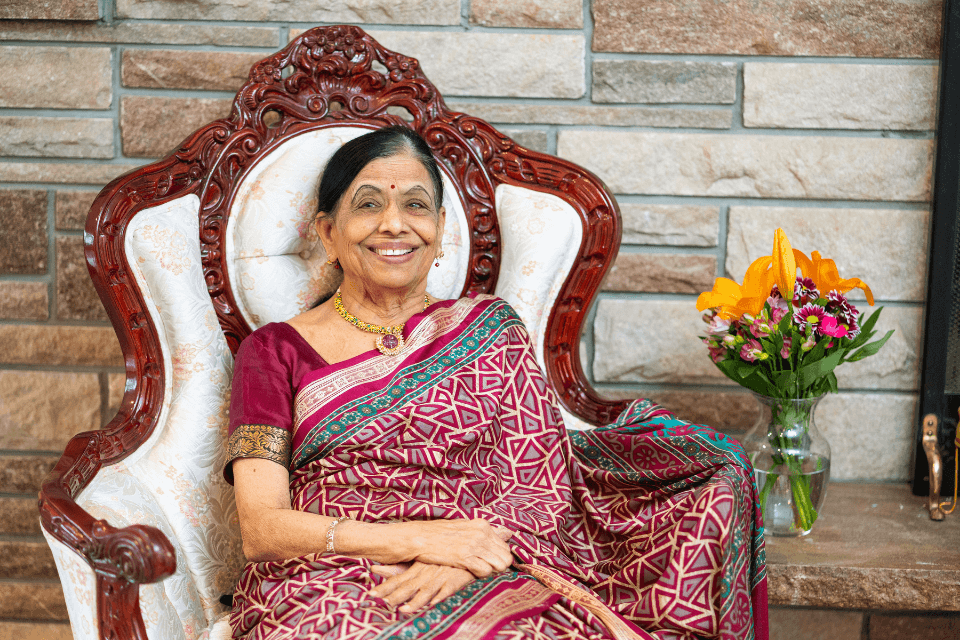 Legacy Place hopes that TogetHER the community will celebrate all the people who positively impact our individual lives and our region, including Nila Shah (nee Kothari), a senior who hails from India and whose life’s mission has been to embody, extol, and encourage the valuable gift that is education.

Born seventy-eight years ago in India, Nila Shah’s early life was fraught with challenges. The youngest daughter of seven siblings, Shah’s family made up for its meager means with a strong work ethic. Her father, an attorney and the first of his family to graduate from college, passed while Shah was young. Then her mother lost her eyesight. Still the family held together. At that time, most young women in Shah’s community left school early to marry by the age of 16. Shah’s older brother, Ujjam Kothari, attended college in the U.S. and supported his siblings and their mother best he could as he sought a medical degree. He advised Shah to seek an education, to wait until she had graduated college to marry and have children. This was an unusual position to take, and one Shah heeded. She applied herself at school and earned a scholarship to Alma College in Michigan. Having never boarded a plane before, the young seventeen-year-old student with no formal English language training made her way to the U.S.

Being an American woman with brown skin in the 1960s wasn’t easy, but Shah also had to navigate being Indian, on her own, a new language and culture, as well as keeping a vegetarian diet no one seemed prepared to accommodate. Nonetheless she persisted. She studied hard, survived on apples and popcorn in her dorm room, and dreamed of her future. Upon the verge of graduating college her mother fell ill, Shah was asked to return to India to care for her and two younger brothers.

Back in India she looked after her family and took on an administrative job to help make ends meet. She was the only woman in her community with a job, and at the age of twenty-four, was considered an old maid. Eventually she met her future husband, Vasant. They lived in Mumbai, with Shah’s new extended family. Together they all lived in a small apartment made up of only a kitchen, a living room, and a single shared space for sleeping. Shah gave birth to two daughters. In a society that valued sons, this was seen by others as a pitiful disadvantage. She dreamed of returning to the U.S., and as her daughters grew, she was determined they’d study abroad. She again bucked expectations once her daughters became school age, enrolling them in an English-speaking program. A few years later they moved to their own place and she spent years caring for her father-in-law.

At home, a young adult from the country was sent by family friends to live with Shah and her family. He would help with chores in exchange for small amounts of money. Though Shah didn’t feel that the arrangement was necessarily fair to the boy, it was a common practice and she felt she could help him. During his time with the family Shah fed him, tutored him, and eventually she and her husband gave him seed money to begin his own business. Later an eighteen-year-old woman followed. Shah would spoil her with Nescafe, fresh fruit, and new clothing. Over time the young woman met a man, and Shah and her husband gave an interest-free loan to the couple so the husband could buy an autorickshaw and become an independent driver and businessman. Next were a niece and a nephew, both of whom she sheltered, nurtured, and helped enroll in college.

Shah supported the underserved even when she faced backlash. Her progressive approach to educating herself, her daughters and helping those considered “servant class” did not earn her admiration or support, in fact it made things much harder for her in the broader community and sometimes caused tumult with other family members.

Finally, in 1985, with the support of her younger brother Babu and his wife Donna, the opportunity to relocate to the States arrived. She and her husband were in their forties, had a home, a business, and a lot of family in India. But they uprooted everything to ensure their daughters would receive an America education and the chance to be independent. They arrived with two suitcases and their girls in tow.

Though she was pleased that her daughters would receive an education, Shah struggled to find work appropriate for herself. She often took jobs requiring manual labor. Even with her education and experience it was difficult for her to find work more suited to her skillset. After working in a laundromat and in a kitchen, she undertook night school graduating with a certificate that allowed her to teach preschool. She settled into a program in Norwood.

As a preschool teacher she was fondly called “nanu” by the children (which means grandma). Many of her students have stayed in touch with her over the years. Together she and her husband raised two college graduates who went on to enter the fields of IT and finance, eventually having children of their own. Nila continued to play an integral role in raising her grandchildren, instilling moral and cultural values, helping them academically in their early years, ensuring they were bilingual and motivating them to reach for the stars and be their best.

Nila Shah has always disregarded the pressures and expectations of others, putting education first. She didn’t want the freedom and opportunity imbued by education for only herself and her daughters, but for everyone and anyone she came across who sought to work hard, to better themselves, and to contribute to society in meaningful ways. Her legacy reaches far beyond her own family and even her closest community, as she’s spread her message of the power of education over an entire lifetime—and two continents.